I think that’s pretty consistent for most 4-person troupes.

And it’s interesting to see teams that have two of those people on their team. Either they get along very very well, or there’s a non-spoken conflict, and eventually one of those people leave.

This is interesting to me less because I have plans of creating a four-person team, but more because it’s never occurred to me that you can boil (all? most?) improvisers’ styles down to such clearly-defined labels.

I’ve taken art classes. One of the first things an Art 101 instructor has to do is get all these pretentious art students to put aside their preexisting “styles”— which have usually grown out of avoiding whichever art skills they struggle with— and learn how to draw like everyone else. Style will come later. For now, learn the rules… then you can break them, consciously & intentionally, instead of breaking them because you’re incapable of following them.

My improv training feels similar. I don’t think I have a specific intentional style yet, but (like all improvisers) I do have a tendency to use the skills I’m better at more often, and ignore the ones I’m bad at. Bad habits + proclivities ≠ style.

My first thought when I heard the quote above was, “I don’t have a style yet; I wonder which style I’d fall into.”

My next thought, after scribbling it down and rereading it, was, “…huh. no, if I were to form a four-person troupe tomorrow, I’d totally be the cynic.”

Calling out the crazy is something I can usually rely on for laughs, but several of my instructors have told me that I’ve erred on the side of “commenting” on the scene, of tearing my partners down, of saying no instead of yes. They’ve also praised me for “calling it out” and “saying the thing,” so I’m not totally doing the wrong thing— I just have trouble seeing that line and recognizing when I’ve crossed it.

POINT: I’m not good enough to have a style yet. I don’t think my cynicism is entirely a style choice; it’s a scared improviser clinging to what seems to work.

But on the other hand… are “charisma” and “improv dad” conscious style choices? Or are they just… what people’s personalities lead them to be good at, and what they unintentionally fall into doing?

I’m an introvert. Whenever I take Meyers-Briggs tests, I’m wayyyyyyyyyy over on the introvert side of the spectrum.

A defining characteristic of introversion is that we’re “quiet and reserved in large groups.“ We are most comfortable by ourselves, or talking to someone one-on-one, maybe two. Not a crowd.

I bring this up because I find that I prefer doing improv with just one scene partner, and I get progressively more freaked out the more people I have to play with at once.

Monoscenes, by definition, require interacting with a large group of people at once, which I’m starting to think automatically sets off my introversion/ social anxiety/ agoraphobia/ fear, and renders me useless for improv.

I was involved (I still am, kind of sort of? I haven’t officially quit) with an indie team that did variations on monoscenes. I was never really into the form, but everyone else seemed to be, so I went along with it. I hoped that I was just inexperienced, that I’d grow to love the form with time. Hasn’t happened.

Those same teammates have commented that it’s really hard to do a good Harold. No argument from me— all long-form improv is really hard. But to my mind, Harolds— or any forms built from straight-up two-person scenework— seem more straightforward to pull off.

I want to improvise laid-back explorations of two-person relationships. I like those in real life, and I like the idea of improvising make-believe versions of them. No pressure. No crowds. Just you and me having a moment together.

I dunno. Improv is hard enough on its own, so why make it even harder?

I do believe that if you’re still mostly failing in the practice room, it’s prudent to be patient and keep it behind closed doors until you’re nailing a slightly higher success rate…. I also believe you can get comfortable being on stage by doing stuff that you have a high probability of succeeding at. Sufficient preparation allows you to build skills, and utilizing those skills drives your success.

(Did I just quote myself? Yeah. Yeah, I did. #arrogance)

Some long forms are more difficult than others. When I get bored of the easier ones, then yes, I’ll move on to something trickier. But I see no reason to jump into something I’m unlikely to succeed at before I’ve mastered some forms that I might actually be able to pull off.

And I’d be more likely to succeed because… I keep thinking about something I read in The Boiling Point a while back.

Your weaknesses never really go away. …when you have more reps, you’re able to lessen the effects.  I believe your weak spots will always be weak, but there are degrees of weakness.  With a ton of rust, your trouble spots just feel much larger.  With practice, you can manage their symptoms.

In other words, everything you’re bad at now, you will always be bad at, sorry.

I think we all come into improv as big chunks of ore with little diamonds in our rough– little talents that were already there to start with. And with training, we can extract and polish all those diamonds into exquisite gems. But when we don’t already have a specific diamond there in the rough beginning, we can’t just make it appear. We can distract from the missing diamonds by showing off our polished gems, or we can throw some of our non-precious ore into a rock tumbler and show that off too, but we can’t polish a diamond that was never there.

Almost since I started improv, I’ve focused on polishing my non-precious ore, because frankly, any improviser should. I don’t want to rely on crutches and bad habits. 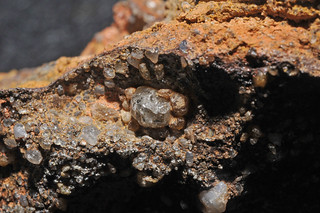 But it’s so frustrating– no matter how hard I polish, all the ore is still rough and worthless. Worthless, everything I have is fucking worthless.

And then I remembered that I DO have some diamonds.

So right now, I’m trying to spend some time polishing the little diamonds I’ve been neglecting, and take some time away from the ore.

Is this something I would recommend? No. It’s a crutch. A bad habit.

But don’t forget about your diamonds. 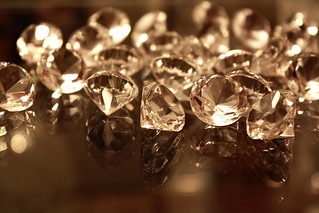 All images used here are released under a Creative Commons license and link back to their source.

And please note: Everything stated here is just my own dumb opinion.

Trying to answer the problem of “well I’m in a shitty mood. Nothing is funny. I’m not funny. How the fuck do I get through this?”

Improvisers think they need be in a certain “positive” mood to do improv, and if they are not, they either don’t bother to show up to class or they ignore their feelings and paint a big latex smile on their faces and muscle through with that fake energy of a birthday party clown. Then when they have a bad improv class or a bad show, they end up beating themselves up or blaming it on their bad day.

What if we looked at those so-called negative emotions as a gift? And instead of trying to push them away, we were brave enough to acknowledge them by saying them out loud to a friend, the class or the group?

…Charlie McCrackin of The Reckoning… said if you are feeling sad or angry you might want to use them in character. Charlie e-mailed me later: “The only things I can add to my thoughts on emotions is that it’s easier to make use of the strong emotions already present in you than to try to build strong emotions from out of nowhere. Plus denying your actual emotions diminishes your ability to play truthfully.”

…just because I have a bad day does not mean I have to do bad improv at night. Instead, I can use those emotions to inspire my choices and deepen my connections with my partners to make me an even better improviser.

That in mind… I got a compliment last night, and I want to write it down before I forget it.

More or less out of the blue, Graham turns to me and says, “No, YOU… you do really awesome characters.”

Startled, I stuttered, “Really? Uh… thanks…!”

“No, I’m serious,” he continued. “Like, when you get on a character, it’s really funny. There was something you did last week… the old lady! That was amazing. I think when you get into a character, it gets you out of your head a little, and frees you up to react in really great ways.”

(I should also mention: Graham doesn’t have much tolerance for bullshit and empty compliments. This is trustworthy insight.)