In my practice group this past week, we worked on status (which was like, whoa, coach, have you been reading my blog? No, it’s a common improv skill to work on, and he probably noticed the same fuckups in last week’s practice that led to me introspecting and writing a bunch of blog posts).

So that was useful.

But I can’t be a misogynist because I’m a woman, right? Yeah I wish.

I struggled with gender identity for years before it finally dawned on me that women are not stereotypes. (i.e. “Women are weak – overemotional – catty – expect special treatment for being female – dress impractically – etc.” / “Oh! You can still be 100% female and NOT BE ANY OF THOSE THINGS, who knew.”) Sadly, those anti-female roots go pretty deep, and my past disdain for women unconsciously bubbles to the surface more often than I’d like.

I’m really lucky to have groupmates— mostly men— who are less sexist than I am. I may think I’m playing a shy, nervous, high-voiced, low-status woman, but then someone will call me “Mark.” Or the other way ’round— I’m a confident, wide-stanced, low-voiced man, but I’ll get named “Sylvia.” It’s a great reminder to get my head out of my ass, and I’m hopeful that someday I’ll learn not to stick it there in the first place.

So thank you, feminist men of improv. You rock.

P.S. Credit where credit is due: I saw the title of this post in my feed reader last week, so it may have sort of inspired this post, but didn’t totally read it until I finished writing. Turns out it’s related and a good read.

I wish I’d gotten out there more, and when I did get out there, I wish I’d said smarter things.

I think those are confidence-borne things that I’ll be struggling with for a long time.

So. I dunno. I’m aware of the problem, 90% of the posts on this blog whine about my lack of confidence, this is a known entity, we’re on it, roger that.

When I talk about lacking confidence, I should specify— I am physically pretty hammy. But when I get up there, my brain deflates like a dead mushroom. I struggle to follow what’s going on. I haven’t developed laser focus yet, and every initiation (after an opening) sets me into a panic of “oh my god, did I zone out during the opening, is she referencing the opening, should I know what to do with this, the audience will know if I missed it, ahhhh I’m just going to sit this one out and let everyone else carry the scene.”

The few times I’ve tried to discuss the “no ideas” issue with my colleagues… it seems like I’m the only one who struggles with it.

Me: I have no ideas. I just go blank when I’m up there.

Them: Wow, really? That must suck.

Ehhhh. I’m still hoping some of this will come with time and practice and experience.

My warmup scene was very well-received.

I’m not terrible at everything, yayyy!!!

It’s my second show ever, and it went better than my first, and maybe my third will go better (maybe not, but I can hope), and it was an experience, and it was kind of fun, and I CAN DO THIS. 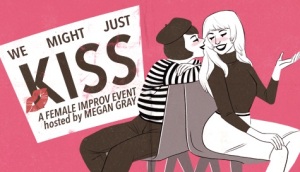 This past week, I discovered an email from Megan Gray, artistic director at the Magnet. I’m on Magnet and PIT mailing lists by choice, so, y’know, whatever, I opened it.

It was NOT, as I had assumed, a mass-mailing; it was a semi-personal request for me to participate in next week’s monthly “female improv event.”

(…after stumbling around my office in disbelief for half an hour.)

Megan often leads those Thursday night jams I do to help conquer my stage fright; she must have tracked me down from that. (Props to her detective skills, ‘cos I never use my last name to sign up.)

Trying to morph that terror into “nervous/excited.”

But I’m prepared for this. I’ve spent months focusing on improv and stage fright. The only way to get over my fear is to JUST KEEP FACING IT until I’m not afraid anymore.

This performance will just be one line in my soon-to-be-long list of terrifying performances. It won’t be amazing, and that’s okay.

Maybe I will fall flat on my face again, but the important thing is I AM GOING TO TRY.

…Get out of your damn head.

Before the show, I have two practice groups and half a class— plenty of chances to work things out, get my head in a good place.

I can do this.

I know what I’m doing.

While my buddies and I were waiting for the doors to open for a “women’s improv event,” we started talking women and comedy. My stance was along the lines of “seriously? this is the 21st century, of COURSE women are as hilarious as men, and have a strong presence in comedy, why is this even an issue, didn’t we get past it decades ago, sheesh.”

The next day, I found a compilation of the best Vines of 2013, which features about 5 women in 23 minutes of 6-second Vines.

(There are more than 5 women in total, but at least 20 of them are sidekicks/ cameos.)

It might just be this one video, but the skewed ratio got me thinking.

What is the actual proportion of women in— for the sake of keeping it to things I sort of understand— improv? The ratios seem pretty evenly 50/50 men/women… but are they really? Remember that Geena Davis piece where she mentions crowd scenes are usually only 17% female, which we viewers see that as totally normal and evenly co-ed?

I ran down all the current improv house teams in NYC that I could find, and averaged the results. (I am not a statistician.) The vast majority of house teams have 2 or 3 women per 8-person team.

*UCBeast has Detroit, an all-woman improv team, and only five house teams in total (that I can find personnel lists for.) I’d say this skews the results in their favor, but no other theater even HAS an all-woman (regular**) improv team, so screw that, UCBeast totally gets all the points here.

**Magnet has The Jezebelles— which are musical improv and not included in this particular count.

Maybe that’s better than it used to be, back in Ye Olde Days, but I’d still like to see it closer to 50/50, and I don’t have a good theory why it isn’t.

I don’t have much experience or insight to offer on this, but I hear that back in Ye Olde Days, female improvisers used to get pegged into submissive/inferior roles. I’m also told that women tend to play much stronger characters now, so maybe that’s coming around, I guess, hopefully.

…Just making a note. It seems important. I’d feel remiss if I left it out.

Yes. What the fucking fuck, don’t even go there, the fuck is wrong with you.